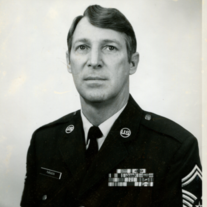 Walter “Bud” Purgason, was gathered in the Lord’s arms and taken to his heavenly home on February 2, 2020 at Annie Penn Memorial Hospital. A graveside service will be held at 2:00 PM Wednesday, February 5, 2020 at Evergreen Memory Gardens with Rev. Walter Daves officiating with full military honors. Walter was born on August 16, 1933 to the late Walter Pink Purgason and Lillian Brown Purgason . He was dedicated to his family and to his country and to his church, Oak Grove Missionary Baptist Church. He was a loving husband, father and grandpa. Walter was a role model to everyone he met and knew him. Walter served his country proudly after 27 years in the US Air Force. He achieved the highest enlisted rank as a chief master sergeant (CMSgt). He will be greatly missed by his family, special friends and his church. Along with his parents, Walter was preceded in death by his son, Don Purgason; sisters: Mary Ann Carter, Kay Purgason, and Nancy James . He is survived by his “Love” wife, Betty and his cherished children: Ben (Kim) Purgason of Stokesdale, NC, Tina (Kirk) Smith of Reidsville, NC, Robin Purgason of Big Spring, TX, and Debbie (Joe) Purgason also of Big Spring, TX; 13 Grandchildren, 13 great grandchildren and 4 great great grandchildren; sisters: Betty Talbott and Jo (Jack) Clifton; brothers: Mike Purgason , Wayne (Patti) Purgason and Daniel Purgason. In lieu of flowers, memorial donations may be made to Mount Jubilee Ministries, PO Box 81, Reidsville, NC 27323.
To order memorial trees or send flowers to the family in memory of Walter "Bud" Purgason, please visit our flower store.
Send a Sympathy Card