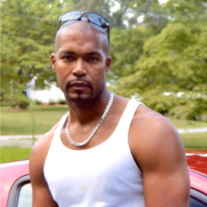 Stephen “Stevie” Lamont Lee, 48, went home to be with The Lord on June 29, 2019 at Forsyth Medical Center. Funeral services will be held at 2:00 PM on Tuesday, July 2, 2019 at Covington Wesleyan Church with Rev. Ralph Clayton and Pastor Michael Galloway officiating. The family will receive friends one hour prior to the service at the church and the burial will follow at Evergreen Memory Gardens. Also, there will be a memorial service on Sunday, July 14, 2019 at 2:00 PM in Winston-Salem, at the Sedge Garden Recreation Center, 401 Robbins Road and the family will receive friends there, after the service. Stevie was born in Rockingham County and graduated from Reidsville High School. He was a sports enthusiast in the grandest sense of the word but his true passion was basketball. He was the point guard for Reidsville High School from 1986-1988 and has been thriving as a basketball official for basketball leagues including all ages from children to adults. Stevie was an eternal optimist and always had a positive influence on everyone that crossed his path! He always spoke Life over the kids he coached, believing in them to be their best. He was a positive role model and was the epitome of Love. He was preceded in death by his maternal grandparents, Tom and Beatrice Parker; his paternal grandparents, Inez and Wiley Lee; his aunts, Carolyn Lee and Gloria Jean Parker; and his uncle, Jimmy Lee. He is survived by his parents Polly and Irving Lee of Reidsville; his sister, Pamela Oates and husband, Jeff of Greensboro; his nieces, Eboni Wiley (Josh Farmer) and Emoni Wiley; his nephews, Jeffrey Oates, Jr. and Nicholas Oates; special friend and like a sister, Kim Hamilton; a large extended family.
To order memorial trees or send flowers to the family in memory of Stephen "Stevie" Lamont Lee, please visit our flower store.
Send a Sympathy Card