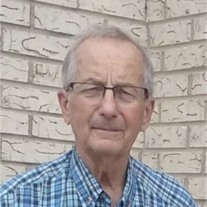 Raymond Richard Williams, 83, went home to be with the Lord on February 22, 2020 at Hospice of Asheboro. A Memorial Service will be held at 2:00PM, Thursday February 27, 2020 at Wilkerson Funeral Home with Reverend Sid Lanier officiating. The family will receive friends immediately following the service and other times at the home of Jodie Strader. Raymond was born on December 27, 1936 in Chicago IL, to the late Raymond Lewis and Lena Kalinsky Williams. He lived in Browns Summit for many years before moving to High Point. He was a member of Pine Woods United Methodist Church and the Methodist Men. He will be remembered for the love of his Lord and the love for his family. Raymond considered it a great honor to donate his body to science at High Point University. He is survived by his children, Craig Williams and wife, Patti, Scott Williams and wife, Carmen, Cori Buck, Jodie Strader and husband, Skeeter; grandchildren, Matthew and wife Rebekah, Michelle, Dannette and husband Nelson, Dagmar and husband Tony, Tara and husband Matt, Dakota, Morgan, Meagan and Mitch; 7 great grandchildren; in addition numerous extended family. In addition to his parents, he is preceded in death by the love of his life for 60 years, Roberta “Bobbi” Williams; sister, Dorothy Jankowski and husband Wally. In lieu of flowers, memorial contributions may be made to Hospice of the Piedmont, 1801 Westchester Drive, High Point, NC 27262 and the SPCA of the Triad, 3163 Hines Chapel Rd, Greensboro, NC 27405.
To order memorial trees or send flowers to the family in memory of Raymond Richard Williams, please visit our flower store.
Send a Sympathy Card