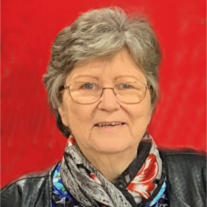 Phyllis Brown Toney, 75, passed away on Friday, January 3, 2020 at her home surrounded by her family. A funeral service will be held at 2:00 P.M. on Wednesday, January 8, 2020 at Lively Stones Baptist Church with Rev. Michael Kent officiating. Burial will follow in the church cemetery. Phyllis was born in Amigo, WV to the late John Ballard Brown and Ruth Little Brown. She was one of eight children and enjoyed many special times with her siblings. Phyllis met Ralph and soon they were married on September 15, 1969. They later moved to North Carolina and raised their four children here. Phyllis was a loving mom who felt much pride for her children’s successes. In her spare time, she enjoyed craft projects, cooking, church events and especially family gatherings. Phyllis was a doting Maw Maw who was adored by her grandchildren. Her belief was strong as Phyllis was a faithful servant to God. Along with her parents, she is preceded in death by her husband, Ralph Herbert Toney; sister, Barbara Trevelline; and a brother, Dodge Brown. Phyllis is survived by her children: sons, Christopher Eugene Toney and wife, Kelly and Douglas Wayne Toney and wife, Arie-Anne; daughters: Susan Toney Jones and husband, Jim, and Paula Ruth Toney; grandchildren: Max, Alyssa, Andie May, Drew, Maddy, Tamara and Jayden; brothers: Doug Brown (Rosie) and Eric Brown (Cheri); sisters: Joan Hill (David), Becky Stonestreet (John) and Jeannie Conrad (Danny). She is survived by many loving nieces and nephews. Visitation for family and friends will take place at Wilkerson Funeral Home on Tuesday evening, January 7, 2020 from 6:00 till 8:00 PM and other times at the home. Memorial contributions may be made to Lively Stones Baptist Church, 2347 Chandler Mill Road, Pelham, NC 27311 and/or Hospice of Rockingham County, PO Box 281, Wentworth, NC 27375
To order memorial trees or send flowers to the family in memory of Phyllis Brown Toney, please visit our flower store.
Send a Sympathy Card