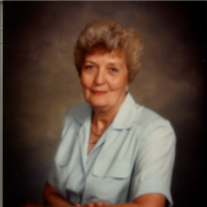 Marjorie “Doodle" Shelton Cooke, 87, went home to be with the Lord on August 19, 2019. She was a resident of North Pointe in Mayodan for the past three years, but had previously resided in Browns Summit. The wheelchair that kept her captive for years is no longer needed. She can now stand in the presence of her Lord and walk the streets of gold. Doodle worked for the Guilford County School System for several years as a secretary at Busick and Monticello schools and later at the County Office. In her mid-thirties, she wanted to do more and make a difference. She went to Rockingham Community College to become a Registered Nurse. After a brief time at Annie Penn Hospital, her nursing career took her to Alamance County Hospital, where she worked in the nursery. She loved caring for the babies and became attached to the NICU ones, who were there for a while. She worked holidays for coworkers who had children, so there were often times, the family would celebrate Christmas Eve after midnight when she returned home from working the 2nd shift. By the time she retired at 62, she had helped with her two grandchildren and was enjoying her first great-grandson. She taught Sunday School, sang in the choir, played the piano and took snack bags to those in the hospital waiting rooms because she knew they would not want to leave to eat. And no one ever went on a trip without a goody bag. She had a heart for the Lord and compassion for everyone. She always put the needs of others before her own. She embraced life with a childlike faith and joy that was contagious. She will always be the heart of the family. She is survived by her daughter, Rhonda Cooke Lambert; grandson, Shawn Overman; granddaughter, Chrystal Overman Wrenn, and husband Freddie; and three great-grandsons, Caleb and Alex Overman and Curt Wrenn. Doodle was preceded in death by her parents, Robert and Nellie Shelton; seven brothers: Oakress, Maynard, Glenn, Sterling, Keith, Johnny, and Oscar Shelton; two sisters, Ozemba McCormick and Juanita Ward. The circle is no longer broken. A graveside celebration of her life will be held on Thursday, August 22, 2019 at 11:00 AM at Apple’s Chapel Christian Church, where she was a member. Following the graveside service, the family will receive friends at the church. The family would like to thank the caregivers at North Pointe and Hospice of Rockingham County for their compassion and tender care of Doodle. In lieu of flowers, the family requests donations for the Alzheimer’s Foundation of America, 322 Eighth Avenue, 16th Floor, New York, NY 10001. Wilkerson Funeral Home in Reidsville is assisting the family with funeral arrangements.
To order memorial trees or send flowers to the family in memory of Marjorie "Doodle" Shelton Cooke, please visit our flower store.
Send a Sympathy Card