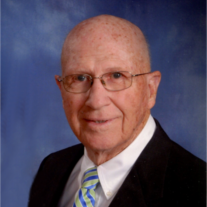 John W. “Buck” Holderby, Jr., 87, of Reidsville, passed away on Sunday, November 3, 2019 at Twin Lakes Community. Funeral services will be held at 11:00 Thursday, November 7, 2019 at Wilkerson Funeral Home with Rev. Joe Tarpley officiating. The family will receive friends one hour prior to the service. Burial will follow in Reidlawn Cemetery. Buck was a son of the late John Willard Holderby and Zettie Dix Holderby. He was a graduate of Reidsville Senior High and a proud member of the football team that won the state championship. Following graduation he served in the US Army for two years, after which he went to school to receive a degree in Commercial Art from RPI Dominion of William and Mary in Richmond, VA. He and his wife, Phyllis owned and operated HodgePodge China and Gift and Hodgepodge Hallmark for 30 years, he greatly enjoyed his sales associates and thought of them as family. Buck was a quiet, private and loyal person, he loved boating, sports and wood working. He was a longtime member of Main Street United Methodist Church. Much of his time was spent investing in real estate in Reidsville, the mountains and coast and had great talent for fixing up properties. He is survived by his wife of 64 years, Phyllis Buckner Holderby; son, Thomas “Tom” Holderby and wife, Shannon; grandchildren, Thomas Holderby, II and Madison Harvey; sister, Gail Crumpler; many nieces and nephews; cousin, Barbara Carter. In addition to his parents he was preceded in death by his son, John "Trey" Holderby, III; and sister, Betty Holmes. In lieu of flowers, memorials may be made to Main Street United Methodist Church, PO Box 338, Reidsville, NC 27323-0338; Cystic Fibrosis Foundation, 4550 Montgomery Avenue, Suite 1000N, Bethesda, MD 20814 or charity of donors choice.
To order memorial trees or send flowers to the family in memory of John W. "Buck" Holderby, please visit our flower store.
Send a Sympathy Card