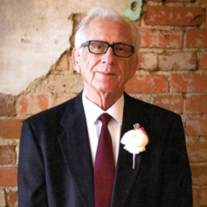 James McDonald Sharpe, 87, went home to be with his Lord and Savior on October 22, 2019, surrounded by the love of his family. A celebration of life will be held at Grace Fellowship at South Park on Sunday, October 27, 2019 at 3:00 pm with Dr. John Marks officiating followed by a military burial at Evergreen Memory Gardens. James was born in Reidsville, NC, on August 10, 1932, to the late Walter C. Sharp, Sr. and Myrtle Fields Sharp. He is preceded in death by sister-in-law Sonja Barham Sharp, and great-nephew Nathanial Lewis, and sister-in-law Barbara Brown Gunn. As a small boy James was fascinated with airplanes. Following this passion, he enlisted in the Air Force. During his service he spent three years in Germany and married the love of his life, Ila Sue Brown. He was last stationed at Luke Airforce Base, Glendale, Arizona. James then attended Emory Riddle, and graduated 2nd in his class with an Aeronautical Engineering Degree. True to his dream of flight, James worked for McDonnell (later McDonnell Douglas) in St. Louis Missouri. During this time, he worked on the Gemini spacecraft, the F4 fighter, and the 119/220 business jet. After years away from home, James and Ila Sue moved back to Reidsville, NC. There James started working as an engineer at Burlington Industries. He later served as plant manager at both Adams Millis, and Zarn (later bought by Plastic Omnium). James retired from Plastic Omnium as Vice President of Manufacturing and Engineering. A man of faith, James was a devoted, lifelong member of First Congregational Christian Church of Reidsville, now Grace Fellowship at South Park, where he played a key role in the life and development of the church. He served as a Deacon, taught teenage and adult Sunday school for many years, and a Friday senior bible study. He was a founding member of the men’s fellowship, where he helped develop the church’s food ministry which is now called In His Name Christian Services, and held leadership positions on many committees through the years. He is survived by Ila Sue Brown Sharpe, his wife of 67 years; his daughter, Susan Teague and her husband, Ed Teague; his brother, Walter Sharp Jr; his grandchildren Amanda Harris and her husband, Gary Harris, Jonathan Teague, Brittney Allen and her husband, Josh Allen, Stephanie Walker and her husband, Taylor Walker; his great-grandchildren, Lauren, Katie, Matthew, and Jack Harris; nieces Lisa Harris and her husband, Mark Harris, Leslie Lewis and her husband, Phillip Lewis; his sister-in-law Brenda Collie and her husband, G.T. Collie; his brother-in-law Edwin Gunn and countless extended family. He will be dearly missed by all that had the honor of knowing him. The family will receive friends at Grace Fellowship at South Park on Sunday October 27, 2019 from 2:00 pm to 3:00 pm. In lieu of flowers, the family requests that contributions may be made as a charitable donation to Grace Fellowship Church at South Park for an associate pastor.
To order memorial trees or send flowers to the family in memory of James McDonald Sharpe, please visit our flower store.
Send a Sympathy Card