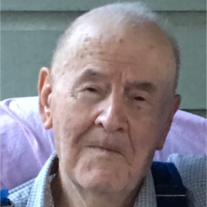 James Henry Brame, 96, of Reidsville, went to his heavenly home on December 8, 2019 to join his beloved wife Mary of 75 years. A Funeral Service will be held at Wilkerson Funeral Home on Thursday, December 12, 2019 at 2:00 PM with Rev. C. A. Brown and Pastor Mike Marshall officiating. Burial will follow at Howard’s Chapel Cemetery. Henry was born May 9, 1923 in Rockingham County to the late James Weldon Brame and Estella Madison Brame. He was a graduate of Wentworth High School. He was a lifelong and faithful member of Howard’s Chapel Christian Church where he served in many capacities. He was a loving and devoted husband, father, grandfather and great grandfather. Henry had a unique sense of humor and loved life, especially with his family on the farm. Along with his parents, Henry was predeceased by his wife Mary Louise Jones Brame; brothers: Herbert, Fulton and Lenius Brame; and sister, Maude Merritt. Survivors include his children: Carolyn Walker (Jimmy), Douglas Brame (Paula), Patricia Coleman, Freddie Brame (Janet), and Dwayne Brame (Tracie); 13 grandchildren; and 17 great grandchildren. Visitation for family and friends will take place on Wednesday evening at Wilkerson Funeral Home from 6:00 till 8:00 PM and other times at the home of his son, Doug Brame. In lieu of flowers, memorial donations may be made to Howard’s Chapel, PO Box 194, Wentworth, NC 27375.
To order memorial trees or send flowers to the family in memory of James "Henry" Brame, please visit our flower store.
Send a Sympathy Card