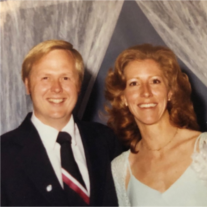 Fred H. Timper, 70, of 2301 Cypress Drive, Reidsville, passed away on Thursday, October 24, 2019 at Annie Penn Hospital. Funeral services will be held at 3:00 PM Sunday, October 27, 2019 at Wilkerson Funeral Home with Rev. Jonathan Brake and Dr. Bob Lowdermilk officiating. Burial will follow in Evergreen Memory Gardens. Fred was born in Queens, NY, and lived in the area until moving to North Carolina in 1968. He received a Bachelor of Science degree from Campbell University in Business Administration. In 1987 he was diagnosed with Leukemia and the Reidsville community rallied and had numerous fund raisers to assist in his recovery. He wanted to give back to his community by serving others. He was member and past president of the Reidsville Chamber of Commerce, the Reidsville Rotary, and the RCC Foundation Board of Directors and active donor for Camp Carefree. He was a member at Woodmont United Methodist Church where he served on the finance committee and worked at First Citizen’s Bank for 39 years, most of those spent in Reidsville. He was an avid fisherman and enjoyed going to the coast with friends from Reidsville. He was a great father, jokester, friend, leader and always wanted to better someone’s day. He was preceded in death by his father, Frederick Timper and wife, of 42 years, Jane Karen Timper; and sister, Jeannie Timper. He is survived by his children, Reed Timper, Natalie Timper Brooks and husband, Jeremy Paul Brooks, Katherine Timper-Taylor and husband, Robert Taylor; grandchildren, Madelyn Donna Brooks and Lillian Jane Brooks; mother, Lucy Timper; brothers, Robert “Bob” Timper and wife, Leslie. The family will receive friends at Wilkerson Funeral Home on Saturday, October 26th from 6:00 – 8:00 PM and other times at the residence. The family requests that In lieu of flowers, kindly send donations to the RCC Foundation, Inc., In Memory of Jane Rawls Timper, PO Box 38, Wentworth, NC 27375-0038.
To order memorial trees or send flowers to the family in memory of Fred H. Timper, please visit our flower store.
Send a Sympathy Card