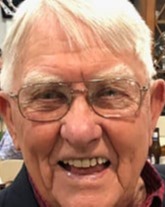 Born in Summerfield, North Carolina, Francis farmed tobacco with his father Irving Knight and his mother Etta (Roark) Knight and four sisters - Annie, Elsie, Ruth, and Dorothy. He graduated Bethany High School in 1941, then joined the Navy and served in the Pacific Ocean Theater during WWII. He and his high school sweetheart, Ruth Christine Wilson, were wed in January 1948. Francis worked with Transcontinental Gas Pipeline in Reidsville, NC. Christine was a 4th grade teacher.

Francis and Christine moved to Virginia in 1971 where he continued to work with Transcontinental Gas Pipeline and then Williams Company. He retired after 30 years as a Communications Specialist. Francis and Christine enjoyed square dancing and camping. Francis loved growing vegetables in his garden and having breakfast and coffee with his friends.

He is preceded in death by his wife, Christine Wilson Knight. Survivors include: son Gregory Francis Knight and his wife Michelle; daughter Bonnie Diane Phillips and her husband Joel; and grandchildren Morgan Diane Phillips and Gregory Patrick Knight. Also surviving is sister in-law Willa Wilson and several nieces and nephews.

Bonnie and Joel will receive friends on Wednesday, January 4, 2022 from 2pm until 4pm at West Cobb Funeral Home and Crematory in Marietta, Georgia.

Funeral Services, led by Pastor Donna Taylor, will be on Friday, January 6, 2023 at 1pm at Hillsdale Primitive Baptist Church in Summerfield, NC. Burial will follow at the church cemetery. Family will receive friends one hour prior to the service from 12PM to 12:45 PM at the church.  Friends and family are invited to gather after the service at a location to be announced.

In lieu of flowers, donations may be made in Francis' memory to Hospice of Virginia, 202 Clark St, Farmville, VA 23901; or towards Cemetery Maintenance Hillsdale Primitive Baptist Church c/o James Knight, 7640 Royster RD, Greensboro, NC 27455
To order memorial trees or send flowers to the family in memory of Francis Knight, please visit our flower store.