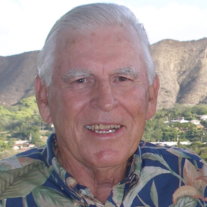 Edward Erle “Moochie” Worsham, born June 22, 1936, passed away on December 20, 2019 at his home in West Covina, CA. Moochie grew up in Ruffin, NC where he was the self-proclaimed prince of Ruffin. He felt this title was appropriate because in his eyes, his Daddy, Sheriff Leon Wesley Worsham was the King of Ruffin. His service in the Army took him to live in Alaska in the 1950’s. When his service was complete he began working for the National Security Agency (NSA). In a career that spanned over 35 years, NSA took him to live in Germany, Maryland and Hawaii. He took an early retirement in 1993 and along with his beloved wife Sandra made the island of Oahu their home. Together they moved to California in 2017 to be close to children and grandchildren. Ed toured all 50 states, exploring most by motorhome. He traveled Europe, visited Australia and went on numerous tours of duty with the NSA to locations such as Panama, South Korea and many other untold regions. He loved to fish, golf and play card games. He lived his life to the fullest without ever forgetting his roots. He loved his friends and family and was always happy to be surrounded by them. Edward is now reunited with his wife Sandra of over 51 years. His mother Lennie Watts Worsham, son Steven Worsham, brothers James Judson Worsham and Jack Watts Worsham were also there to greet him as he arrived in Heaven. He is survived by his daughter Denise Perry (Mike) of Lake City Florida, son Roger Worsham of Wilmington North Carolina, son Bradley Worsham (Stacey) of La Mirada California and daughter Valerie Martinez (Steve) of La Verne California. He is also survived by 6 grandchildren and 6 great-grandchildren. A celebration of his life will be held Saturday, January 18th at 11:00am at Ruffin United Methodist Church, 9640 US-29 Business, Ruffin, NC 27326 with inurnment following Ruffin Cemetery. The family will receive friends in the fellowship Hall following the service. Memorial contributions may be made to the Ruffin Cemetery Fund,c/o Bobby Wharton 237 Worsham Mill Road, Ruffin, NC 27326 or Ruffin United Methodist Church, P.O. Box 66, Ruffin, NC 27326.
To order memorial trees or send flowers to the family in memory of Edward Erle "Moochie" Worsham, please visit our flower store.
Send a Sympathy Card