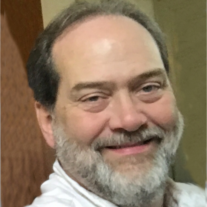 Craig Alan Canady went to his heavenly home on September 14, 2019. He was born May 13, 1966 in Greensboro and had resided in Browns Summit since 1994. He was a wonderful husband, father, son, brother, and friend. He leaves behind his wife of 25 years, Teresa Rumley Canady and son, Caelan Scott Canady. Craig was preceded in death by his father, Henson Turner Canady, Jr. In addition to his wife and son, he is survived by his mother, Minnie Sue Johnson Canady, brother, Curtis Canady (Rita), as well as many brothers-in-law, sisters-in-law, nieces, nephews, great nieces and great nephews. Always with quick wit, Craig never met a stranger. He loved and cherished his wife and son. A devoted and dedicated father, he took great pride in watching Caelan grow and succeed. He was adored by his nieces and nephews, for whom he served as a human jungle gym and playmate. A hard worker, Craig was a supervisor in Equipment Services for the City of Greensboro for 21 years, along with 11 years at Estes Trucking Company. Craig was formerly employed by Bill Black Automotive for 16 years. He was a Mason and a member of Revolution Lodge #552 in Greensboro. Visitation will be held at Wilkerson Funeral Home on Tuesday, September 17, 2019 from 6:00-8:00 PM. Funeral services will be held 2:00 PM at Wilkerson Funeral Home in Reidsville on Wednesday, September 18, 2019 with Pastor Randall Shaw officiating. He will be laid to rest at Evergreen Memory Gardens. The family will also receive friends at the home. Craig’s family would like to extend their sincere thanks and appreciation to the wonderful staff of Moses Cone Hospital. In lieu of flowers, donations may be made to the American Diabetes Association, 2451 Crystal Drive, Suite 900, Arlington, VA 22202
To order memorial trees or send flowers to the family in memory of Craig Alan Canady, please visit our flower store.
Send a Sympathy Card