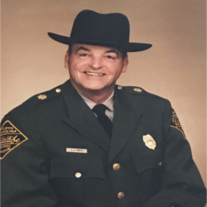 Charles Jefferson Smith, 81, of Raleigh, passed away at his home on Saturday, October 12, 2019. A celebration of his life will be held at 11:00am, Thursday, October 17, 2019, at Wilkerson Funeral Home Chapel in Reidsville with Rev. Gary Loftis officiating. Burial will follow at Pleasant View Assembly of God Church Cemetery in Caswell County. Charles, better known as CJ, was born on June 19, 1938 in Caswell County to the late Julius Leonard Smith and Virgie Mae Loftis Smith. He was a 1957 graduate of Bartlett Yancey High School. After graduation he served in the US Army and worked as a Police Officer in Greensboro and Reidsville. After leaving the Reidsville Police Department he became a Wildlife Enforcement Officer. He spent 30 plus years with the NC Wildlife Resources Commission and retired as a Lt. Colonel. CJ loved buying old pickup trucks and tractors and fixing them up in his spare time. Along with his parents, he was preceded in death by his wife, Delores Elaine Tate Smith, and his brothers, Cecil Allen Smith and Julius Leonard Smith, Jr. He is survived by his sons, Charles Kevin "Chuck" Smith of Wilmington and Bart Shannon Smith of Raleigh; his grandchildren, Preston, Parker, and Peyton Smith of Wilmington; his sisters, Wyomie Kimbro, JoAnn Parsons, Isa Parker, Glenda Davis, Sandra Smith, and Jewel Frazee; his sisters-in-law, Bessie Sparks, Barbara Tate, and Lorene Lawrence; brothers-in-law, Richard Parker, Dewey Lawrence, John D. Tate, Jerry Sparks, and George Tate, and numerous nieces and nephews. The family will receive friends at Wilkerson Funeral Home in Reidsville on Wednesday, October 16, 2019 from 6-8pm.
To order memorial trees or send flowers to the family in memory of Charles Jefferson Smith, please visit our flower store.
Send a Sympathy Card