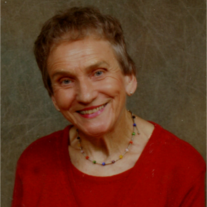 Annie Kimbro Foster, 91, passed away Sunday, February 16, 2020. She was born July 28, 1928 in Reidsville, North Carolina to the late James Thomas and Lucy Manley Kimbro. Ann never met a stranger. She gave so willingly of herself to her family, her friends and the community. She retired in 1992 from Mutual Savings Bank to care for her husband, Matthew W. Foster until his death. She remained on the Mutual Savings Board and became an Emeritus member of the board for BB&T. She also began her volunteer work in earnest as she served on the boards of the Salvation Army, becoming a lifelong member, and was a member of the Annie Penn Hospital Auxiliary Board. She also volunteered in the Day Surgery Department at Annie Penn for more than 20 years, logging over 28,000 hours. She served on numerous other boards: Cone Hospital Institutional Review Board, Nursing Home Board, and Unified Home Health Board. She was a member of the Reidsville Woman’s Club where she served as chaplain. She was a charter member of Faith Christian Church where she taught Sunday School and served as assistant treasurer as long as her health permitted. Ann was the recipient of the WFMY 2 Those Who Care Award in 2004. Over the years she was recognized numerous times by those who knew her, from Reidsville, Rockingham County, the State of North Carolina and Washington, DC. Ann was also preceded in death by her sisters: Beulah Allen, Mildred Sutton, Ellen Talley, Irene Williams and her twin sister, Alma Pettigrew. Surviving are her son, Rick and his wife, Elizabeth: her pride and joy, grandsons; Corey (Amy) Foster and Josh (Christina) Foster: great-grandchildren; Spencer, Cooper, Eva, Katie Mack and Harrison. Funeral services will be held at 3:30 PM Wednesday, February 19, 2020 at Wilkerson Funeral Home with Chaplain Patricia Wright and Rev. Tom Miller officiating. The family will receive friends at the funeral home from 2:00 PM – 3:15 PM, prior to the service. The burial will be held privately at Alamance Memorial Park. In lieu of flowers the family ask that memorials be sent to Salvation Army of Reidsville, 704 Barnes Street, Reidsville, NC 27320 and Annie Penn Hospital Auxiliary, 618 South Main Street, Reidsville, NC 27320. The family would like to thank Countryside Manor for the care and compassion they gave to Ann.
To order memorial trees or send flowers to the family in memory of Annie Kimbro Foster, please visit our flower store.
Send a Sympathy Card