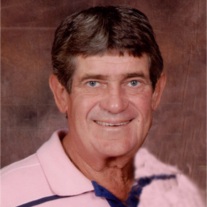 Albert Junior Loye, 72, went home to be with The Lord on Tuesday, August 27, 2019 at his home. Funeral services will be held at 11:00 AM on Friday, August 30, 2019 at Wilkerson Funeral Home with Rev. Heath Lloyd officiating and the burial will follow at Evergreen Memory Gardens. The family will receive friends Thursday, August 29 from 6:00 – 8:00 PM at Wilkerson Funeral Home and other times at the home. Junior was born in Rockingham County to the late Albert and Edna Earl Loye. He was retired and was the former owner operator of Junior Loye Tree Service. He also retired from the American Tobacco Company after 30 years of service. He was a longtime and faithful member of Fairview Baptist Church. Junior looked forward to his weekly time with his golfing buddies. He was faithful to ride around town checking on his friends and was quick to stop helping anyone in need. His friendly and kind spirit will be greatly missed: a true servant, Junior always put others first!! Along with his parents, he was also preceded in death by his brother Mickey Loye. Junior is survived by his wife Carolyn Hicks Loye of the home; sons Chris Loye and wife Kim of Reidsville and Matt Loye and wife Taryn of Poquoson, VA; step son Jeff Farmer and wife Tonya of Reidsville; grandchildren Jake Loye and wife Amanda, Jordan Loye Moore and husband Brent, Makenzie Farmer, Aiden Loye and Hadlee Loye; great grandchildren Nash, Brady and Paxton Albert Loye; brother, Rickey Loye and wife, Pam; step mother Joanne Loye; his faithful companion Boston Terrier, Jackson; and a large extended family and many friends. Condolences can be sent to the family at www.wilkersonfuneral.com.

To order memorial trees or send flowers to the family in memory of Albert Junior Loye, please visit our flower store.
Send a Sympathy Card