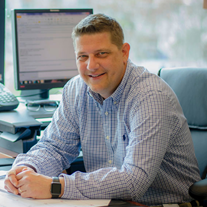 Adam Joseph Stopka, 48, of Greensboro, went home to be with The Lord on Saturday, August 3, 2019. A memorial service will be held Wednesday, August 7, 2019 at 2:00 PM at Ebenezer Lutheran Church with Rev. Fair officiating. The family will receive friends one hour prior to the service. Adam was born in New Haven, Connecticut to the late, Joseph Dominic Stopka and Sally Ann Dresser Stopka. He worked for one company his entire professional career Lorillard/ ITG Brands where he was promoted multiple times and moved everywhere from Connecticut to Cincinnati to Cleveland finally settling in Greensboro. He was an avid fly fisherman and spent many days wading the Farmington and Hammonasset Rivers. He had a love for animals and nature; he especially loved his dogs Mookie and Blue. He had a keen sense of humor and was a skilled golfer. Later in life, he discovered a passion for playing tennis with his wife. Most of all he loved his wife, sons and family. He was very proud of them. Along with his father, he is preceded in death by his Aunt Mary Jane Hedberg, as well as his beloved dogs Sophie, Ollie and Maggie. Adam is survived by his wife of 21 years, Catherine Marsh Stopka; sons, Terry Huett (Kana), James Stopka, Zachary Stopka, and Dylan Stopka; grandchild, Lina Huett; mother, Sally Ann Stopka; brother, Matt Stopka; nephews, Ben, Matthew, and Brennan Stopka as well as a loving extended family.

To order memorial trees or send flowers to the family in memory of Adam Joseph Stopka, please visit our flower store.
Send a Sympathy Card